The Chaos of Others

2 Comments Posted by ALCStudies Journal on Wordpress on July 21, 2015

Pittsburgh opened its arms, er paws, last week to the Anthrocon convention. The Furries came to town in rags, tags and velvet gowns. The event was a testament to the region’s diversity and tolerance. It also brought in a ton of money.

Ten years ago, the same week as the Furries’ arrival in Pittsburgh, terrorists’ bombs went off in London. Fifty-six people on subways, trains and buses died. Hundreds were injured. All to defend religious belief and identity.

Open a newspaper or a website and chaos arrives at your virtual doorstep: news from nowhere and everywhere. The world is a scary, confusing place filled with sound and fury (as well as furry). One week it’s a misguided young man in Memphis shooting folks at a church; the next refugees fleeing Somalia.

We work hard to convince ourself the world is orderly nonetheless. We tell ourselves stories in order to live — myths to impose structure and meaning. We cannot help seeking the sermon in the suicide, wrote Joan Didion (who also wrote an essay inspired by Yeat’s poem.)

We seek solace in technologies that allow us to control nature1 while subverting our better natures. People stare at their smartphones on the bus or subway or while driving as if gazing into a Delphic oracle. In a high-tech society where we purport to make rational, scientific decisions based on statistics and datamining, online fantasy games and graphic novels about magical worlds are increasingly popular.

Given the above, the fact that people pursue drugs like marijuana and heroin as a pathway to an alternate reality is no surprise, though no less pernicious.

Or, one can live in a part-time fantasy world, dressing up in costumes, uttering spells and engaging in strange rituals with others of similar beliefs. Religious dogma offers consolation with the condition that we buy into whatever story is told by those in authority that reassures us we are among the elect.

Soccer, baseball and other sports fans know this as well. Pittsburgh Steelers football fans dress in black and gold and go tailgating.

What if some people deal with the chaos around them and in their own lives by impersonating cats, dragons and other creatures and wearing a tail?

Personally, I’m a fan of humor. In the film Duck Soup a country (not Greece, but just sayin’) goes to war to pay its debts. The Marx Brothers turn the considerable chaos and danger of their 1930s world of Hitler and Mussolini and fascism on its head. Look, they say, this silly stuff can’t hurt you. Look how absurd. Shakespeare does that in plays from Midsummer Night’s Dream to Twelfth Night. 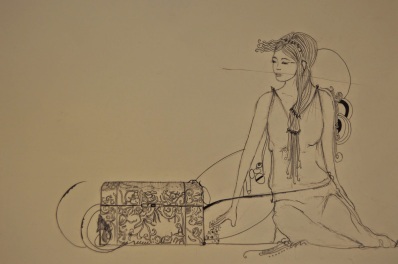 Comics like Lenny Bruce, Richard Pryor and Robin Williams open the Pandora’s box of our identity (with the emphasis on Id) and allow us to peek briefly at the darker angels of our natures2 — little Grendels aching to get out and smash the world or blow it up. Dancing on the knife edge of sense and nonsense led each of them to the edge of sanity and beyond. Do we forget their loss so cheaply?

What is mental illness but a mind overwhelmed with chaos? Maybe depression, schizophrenia and other maladies are alternate stories a desperate mind tells itself to make sense of the world.3 Our treatments address the damaged neurochemistry or faulty wiring while still ignoring the suffering spirit. The rest of us may be deluded, or stupid, or heavily medicated, but we manage to keep our suffering – and that of others — at arms length. Compassion requires entering, or at least acknowledging, the chaos in others. This is uncomfortable and scary, because it echoes the potential or actual chaos within each of us as individuals and societies. But if we fail to do so, chaos grows, takes on a life of its own and perpetuates evil. Like terrorists blowing up subways, trains and buses, or shooting strangers.

If the alternative is dressing like anthropomorphic creatures and strutting around town, I’ll serve the FriskiesTM. — CDL

2 Not to say Weeping Angels