The Rains of Quito

2 Comments Posted by ALCStudies Journal on Wordpress on January 7, 2018

Quito sits in the middle of the world on the equator – Ciudad Mitad del Mundo. The climate is changeable. If you don’t like it, wait five minutes, Quitoans say.

A new Ecuadorian friend recommended I visit La Capilla Del Hombre (The Chapel of Man). The museum sits in the Bellavista section overlooking Quito. I walked from my hotel near the Diego de Almagro. People warned me it was a hike, but despite being at a birthday party1 till 2 AM I wanted a little more urban adventuring. Ecuadorians know how to throw a fiesta, by the way.

Google maps shows routes by foot, taxi or bus. It does not show elevation. The museum sits high over the city. A little urban adventuring turned into a considerable urban ascent.

I saw some nice graffiti. 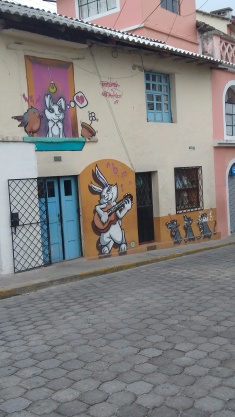 And an urban cow.

Entrance to the museum is eight dollars USD. Ecuador switched to U.S. dollars Several years ago to stabilize its economy. After some initial pain Ecuadorians I’ve met say it has generally worked.

The Capilla Del Hombre museum is a tribute to the work of Ecuadorian painter Oswaldo Guayasamín and the Ecuadorian people. The museum features his work and the work of other artists as well. There is a separate building aside from the capilla (chapel) itself. The docent at the entrance asked whether I wanted a tour en Inglis or in another language. I found myself on the ass-end of a group being regaled ad infinitum with the details of every object on display.

The guide was doing his job. But I’ve gotten a little tired of words lately. I use more than enough of them myself, both written and spoken, personally and professionally, to try and find a narrative to our sometimes crazy lives.2 Maybe we think if we talk (or write) long enough it will all make sense. What I desired was to soak up a little tranquility and appreciate the art and the space. Isn’t that what I hiked up the hill and paid for?

I saw an open door. There was no rope or sign indicating it was restricted. I left the group and went in. I found myself alone in Guayasamín’s studio. I immediately found the tranquility I was looking for. Canvases, tubes of paint and works in progress surrounded me. The docent came in and said for security reasons I had to go back and stay with the group. I explained In bad Spanish that no one had told me this. I said I knew visual and other artists back home and enjoyed the creative process. I said my wife had died in the past year and I wanted some quiet. I said this with a smile. She said there would be another tour in English in ten minutes.

While other visitors filed in and waited, I sat and watched a video in the lobby. I wanted to be alone with my thoughts – or with no thoughts at all. Solitude is an increasingly subversive act of modern life whether in Estados Unidos or in Ecuador. Our crowdsourced society cajoles, pokes and inveigles us to share (or submerge) our innermost ideas and precious attention in the constant media stream, turning our lives and experiences into commodities for sales and marketing.

I decided I’d had enough of the group experience. I left the museum and walked outside. Among the greenery and outdoor sculptures, I felt better. In the distance mist wreathed the Pichincha Mountains that rise above Quito and that Guayasamin depicted in his paintings.

I followed the path and entered the chapel itself, a vast space with Picaso-esque sculptures and paintings by Guayasamín and other artists.

Any human being who has a heart and isn’t overly-medicated knows the feeling before tears erupt. One of the most stupid and compassionate questions to ask someone is ‘Why are you crying?’ Half the time we’re not aware ourselves, at least to start. Pressure built up in my chest and behind my eyes. As I wandered through the chapel, tears started to flow – what in our family my father called waterworks .

I liked the view and the graffiti on the way to the museum. I liked the unexpected cow. I liked Guayasamín’s work. I went to the museum because a friend suggested it. I didn’t expect to see reminders of my dead wife’s face in the paintings on the walls.

‘Please don’t cry,’ my new friends tell me. ‘Don’t be sad and dwell on the past with us in this new place in this new year. They tell me this because they care about me and enjoy seeing me happy. But my tears were not pathological but cleansing.

Our society increasingly denies and medicates sadness and insists on normalization and conformity of our feelings to the mean3. Art retains the power to evoke our unruly emotions and memories, joy and pain, that do not conform to its rules.

I emerged from the museum to the mists of Quito around the Pichincha mountains. Nowadays this includes smog from the herds of cars in Quito’s streets. A fine rain started to fall. I was starving and felt lightheaded. I’d bought water but knew I had to eat. I stopped for lunch at a small place. For 2.50 USD I had meatballs with rice and yucca, along with ubiquitous and wonderful Ecuadorian salsa picante. I came out feeling much better .

I descended the steep streets back to the traffic and bustle of the city.

The rain turned heavier, temporarily washing the grit and fumes from the air. It left the atmosphere clear and fresh.

2And yet here we are again.

3The statistical mean, as well as in the sense of low and unkind.